In 2015, NPR and ProPublica released the findings of an investigation into how the American Red Cross spent nearly $500 million raised after the 2010 earthquake in Haiti. They found that through all the money raised, the organization had built just six homes. The report prompted a congressional investigation that a year later would largely bolster the conclusions of ProPublica and NPR’s report: The ARC had spent a considerable percentage of the money it was supposed to use to help Haitians on internal and administrative expenses. Since the release of the report, and following recent natural disasters, some have questioned if Red Cross donations are being used in the best interests of those in need.

But which is correct? Did the investigations into the Red Cross produce clear evidence of waste? And if not the Red Cross, what other charities might be more worth the generosity of those who wish to help?

Following the 2015 report from NPR, Republican Iowa Sen. Chuck Grassley launched an investigation into how Red Cross donations are used to help affected areas. The Government Accountability Office (GAO) investigation found that $125 million of the nearly $500 million raised was used on internal expenses, including $70 million on “program expenses” that were supposed to be used to oversee and evaluate ARC’s Haiti programs. According to NPR, “Grassley’s office found that the charity was ‘unable to provide any financial evidence that oversight activities in fact occurred.'”

Grassley’s report also indicated that the organization “stonewalled” the investigation throughout, with Grassley himself commenting, “We did not get satisfactory answers — like pulling teeth, it was very difficult.”

The ARC website says that “91 cents of every dollar [the organization] spends is invested in humanitarian services and programs.”

But Grassley’s investigation found that part of the $125 million in Red Cross donations was being spent on new fundraising initiatives, public relations duties, and other management costs.

Those “management costs” have become another avenue of criticism, as many question the salaries of the executives running ARC who, including CEO Gail McGovern, are former top-level executives from AT&T. They have little to no background in humanitarian aid, and have run the charity more as a private corporation with massive cuts to chapters and employees.

As for the millions that were not spent on the above, the GAO investigation found that the bulk of Red Cross donations were sent to other nonprofits to do work on the ground. That sounds good until factoring in the cuts that the other nonprofits take for their own expenses. At times, that results in as much as an additional 11 percent being taken off the top.

“The most important thing [from the report] is an unwillingness to level with the people exactly where the money went,” Grassley told NPR. “There’s too many questions in regard to how the money was spent in Haiti … It gives me cause to wonder about other money being donated for other national disasters.”

It’s not just investigators who are unsure where that money is going. When NPR did a follow-up piece in August 2017, it sat down with a top ARC executive (a request to interview McGovern was denied) to discuss relief after Hurricane Harvey, and the executive couldn’t tell them what portion would be going to helping victims of the devastating hurricane.

If the ARC is raising money to only then funnel it to another charity (after taking their administrative cut), doesn’t it beg the question: “Shouldn’t I just donate direct to the other charities?”

So what charities do have notable records of providing substantial portions of their fundraising as well as transparency of where that money is going?

CharityWatch provides a letter grade and detailed information for thousands of charities, and provides a list of best charities based on the category. For instance, CharityWatch gives the NAACP Legal Defense and Education Fund an A- for organizations that seek to help African-Americans; it awarded an A+ to the Breast Cancer Research Foundation for cancer research; it gave two organizations an A+ for veterans and the military (Fisher House Foundation and the Semper Fi Fund).

The ARC made CharityWatch’s “best” list for “health-general,” but was rated a B+ compared to 21 other organizations that were rated higher.

Charity Navigator released a list of best charities to donate money to in the wake of Hurricane Harvey and listed the ARC as well, but gave it three out of four stars compared to Good360, which received four out of four. These ratings are certainly not damning, but it does show that watchdog groups at least seem reluctant to give top grades to ARC’s charitable endeavors.

In 2016, CNBC and Charity Navigator compiled the 10 best charities (with budgets exceeding $100 million and net assets of at least $65 million) based on the organization’s financial health, accountability, and transparency of reporting.

While it’s clear that the ARC is in fact providing the services that it promises on its website, it’s possible that too much of the money that it raises isn’t going where people need it most. Many other organizations could be considered in lieu of Red Cross donations for disaster relief if you’re concerned where your money may be going. SHARE these great charities with your friends! 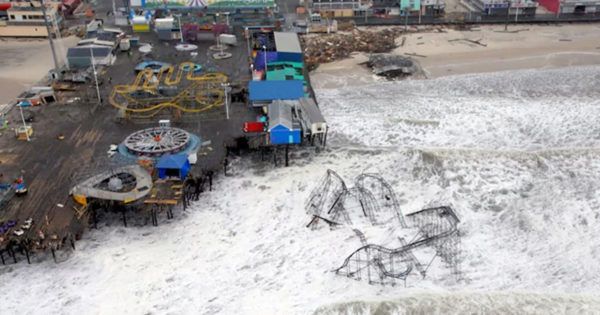 History's Worst Hurricanes From the US and Around the World
In recent years, the United States has been struck by a number of devastating hurricanes that have claimed lives, destroyed homes, businesses and communities, as well as cost the government ...
click here to read more
Advertisement - Continue reading below
Share  On Facebook

Kerry, on private travel to Nice, to visit American hurt in attack

These Abandoned War Tanks Will Leave You Speechless