Republicans in the House of Representatives announced a new investigation into Hillary Clinton to review her involvement in a 2010 uranium deal between the United States and Russia in which the U.S. government approved the sale of a uranium mining company to a Russian-owned one. The investigation is seeking information related to donations made to the Clinton Foundation, and if those donations were the basis of a “pay-for-play” agreement from when Clinton was serving as secretary of state.

At a campaign rally in October 2016, then-candidate Trump claimed, “Remember that Hillary Clinton gave Russia 20 percent of American uranium and, you know, she was paid a fortune.”

The claim seems to stem from a 2015 book by right-wing publication Breitbart author Peter Schweizer. The book, Clinton Cash: The Untold Story of How and Why Foreign Governments and Businesses Helped Make Bill and Hillary Rich, contains a chapter on the 2010 uranium deal that was approved while Clinton was secretary of state. The book alleges the approval to transfer U.S. uranium reserves to a Russian company for $145 million in donations to the Clinton Foundation.

“The mining company, Uranium One, was originally based in South Africa, but merged in 2007 with Canada-based UrAsia Energy. Shareholders there retained a controlling interest until 2010, when Russia’s nuclear agency, Rosatom, completed purchase of a 51% stake. Hillary Clinton played a part in the transaction because it involved the transfer of ownership of a material deemed important to national security — uranium, amounting to one-fifth of U.S. reserves — thus requiring the approval of the Committee on Foreign Investment in the United States (CFIUS), on which the U.S. Secretary of State sits.

“During the same time frame that the acquisition took place,” Schweizer claims in Clinton Cash, “the Clinton Foundation accepted contributions from nine individuals associated with Uranium One totaling more than $100 million.”

The deal has become a favorite attack line of conservatives, even resulting in memes that are shared widely on social media.

The key points ignored in the criticism show that Clinton didn’t “give” uranium to the Russians as Trump claimed; the donations to the Clinton Foundation were largely given years before the deal. Even as secretary of state, Clinton had very little say in the final approval of the deal, and it’s likely she didn’t play much of a role at all.

First, the United States agreed to the approval of Russian company Rosatom taking a majority stake in the Canada-based UrAsia Energy, but the “uranium was not — nor could it be — exported, and remained under the control of U.S.-based subsidiaries of Uranium One, according to a statement by the Nuclear Regulatory Commission,” Snopes reported.

“NRC’s review of the transfer of control request determined that the U.S. subsidiaries will remain the licensees, will remain qualified to conduct the uranium recovery operations, and will continue to have the equipment, facilities, and procedures necessary to protect public health and safety and to minimize danger to life or property. The review also determined that the licensees will maintain adequate financial surety for eventual decommissioning of the sites. Neither Uranium One nor ARMZ holds an NRC export license, so no uranium produced at either facility may be exported.”

The second main point of interest to critics of the deal centers on the $145 million in donations given to the Clinton Foundation, but records show that $131.3 million of that came from a single donor, Frank Giustra, the founder of Uranium One, who had sold his entire stake in the company in 2007, three years before the Russian uranium deal and almost a year and a half before Clinton became secretary of state.

The New York Times reviewed the other members connected with the Uranium One deal who donated to the Clinton Foundation and found only one contributed to the foundation during the same time the deal was being approved. Ian Telfer, the company’s chairman, donated approximately $2.35 million to the Clinton Foundation between 2009 and 2012, but stated his donations were to support Giustra’s philanthropic endeavors with the foundation. He and Giustra have been friends and business partners for more than 20 years. Telfer stated he had never had any discussions with Mr. or Mrs. Clinton regarding Uranium One.

Another key fact ignored in criticizing Clinton’s involvement in the uranium deal is that many mistakenly believe Clinton herself could approve or veto the deal, which by law only the president can do. The secretary of state sits on the CFIUS as one-of-nine U.S. agency members. It’s chairmen is the secretary of the treasury. The CFIUS evaluates any transactions and turns its findings over to the president, who makes the final decision. Even though Clinton was a member of the committee, the facts show that she didn’t intervene in most committee matters because then-Assistant Secretary of State Jose Fernandez represented the State Department on CFIUS business.

The facts do not support the claim that Clinton was involved in “pay for play” within the State Department. The president seems most concerned with the debunked claim that “Russia has 20 percent of our uranium, for whatever reason.” From the standpoint of national security, that would be a scary situation, but the terms of the deal show the uranium would not be exported.

But for the president to level this charge at Clinton is curious, since he’s said on multiple occasions that he wants a closer relationship with the Russians.

“You want to make a good deal for the country, you want to deal with Russia — and there’s nothing wrong with not fighting everybody, having Russia where we have a good relationship as opposed to all the stupidity that’s taken place,” Trump said at a news conference in February 2016.

In April 2016 Trump said, “We’re going to have a great relationship with Putin and Russia.”

In February 2017, Trump said, “I would love to be able to get along with Russia. Now, you’ve had a lot of presidents that haven’t taken that tack. Look where we are now.”

The question remains of whether or not Republicans believe working with Russia is good or bad, which seems more like a partisan accusation as the FBI continues its investigation into whether the Trump campaign and Russia colluded during the 2016 election to help get the president elected. 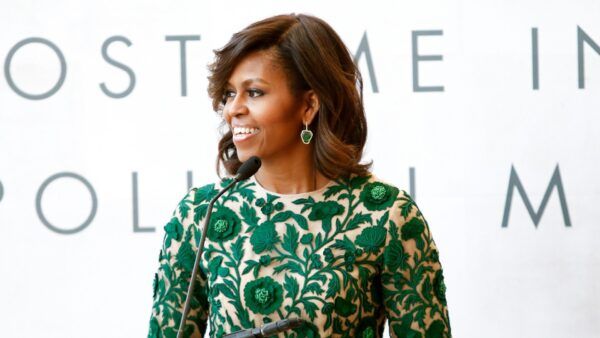 Ranking America’s First Ladies From Most to Least Popular
The exact role of the first lady in American history has always fluctuated depending on the year, social context, and the woman herself. However, during the Clinton administration is when ...
click here to read more
Advertisement - Continue reading below
Advertisement - Continue reading below
Share  On Facebook

Wacky Toys Everyone Played With Growing Up