LOS ANGELES (Reuters) – It was a repeat for HBO at television’s Emmy awards on Sunday as the premium cable network’s “Game of Thrones” and “Veep” won the night’s top trophies, thwarting competition from deep-pocketed streaming services for the industry’s highest honors.

“Game of Thrones” writer D.B. Weiss thanked Time Warner-owned HBO on stage for “the support and resources to keep this giant lizard flying.”

Emmy recognition can help bring in bigger audiences, and more advertising dollars, at networks like FX that run commercials. For pay cable or streaming services, the awards glow can help attract new customers.

The competition escalated in recent years as newcomers like Netflix Inc and Amazon.com Inc poured money into programming, setting off a battle for top talent and the most buzz-worthy shows.

Netflix says it will spend $5 billion on programming this year, more than double the roughly $2 billion spent by HBO. FX’s programming budget is one-sixth the size of Netflix’s, FX President John Landgraf told the Television Critics Association in August.

Louie Anderson, winner for best supporting actor for comedy “Baskets,” credited FX with worrying less than others about initial ratings.

“On FX, the numbers didn’t matter as much. After five episodes airing, they decided to keep us for another year,” Anderson said backstage.

Netflix won nine Emmys including best documentary for “Making a Murderer” and best comedy writing for “Master of None.”

“I think there’s great stuff on network, on streaming, on cable,” “Master of None” co-creator Alan Yang said backstage. “What’s great about Netflix, for us, is that they gave us a lot of freedom and trusted us to pursue our personal stories, and that’s why they’re rewarded with stuff that feels fresh.” 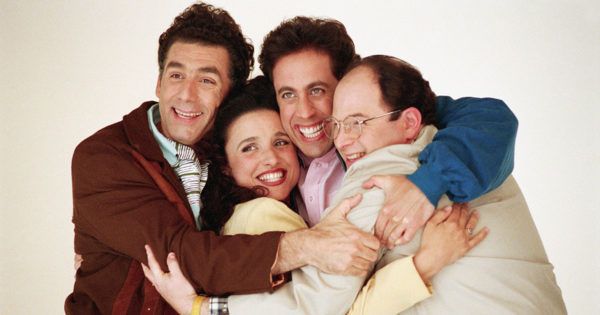 Are You the Master of Your Domain? Take the Ultimate 'Seinfeld' Quiz and Find Out!
Widely regarded as the most successful and brilliant sitcom in television history, Seinfeld raised the comedic television bar when it debuted in 1989, and it delivered millions of laughs until it ...
click here to read more
Advertisement - Continue reading below
Share  On Facebook