While most of us enjoy cow’s milk in our coffee or tea each morning, a slew of non-dairy milks have gained popularity in recent years. Consumers are choosing to drink non-dairy, plant-based milks for a number of reasons: They may be lactose intolerant, allergic to milk protein, avoiding pesticides or hormones, or they may be going vegan for ethical reasons.

Each milk substitute has its own nutritional strengths and weaknesses, although none deliver the same nutrition as cow’s milk. But how are plant-based products, such as almonds, converted to “milk?” We’ll compare non-dairy milks below so you know which one is right for you.

Soy milk, the most common substitute for cow’s milk, is made from the soybean. The beans are soaked for several hours, ground up, and the pulp is filtered out. Then they’re boiled for sterilization and to bring them to a milk-like consistency. Soy milk has been manufactured in the United States since 1897, but they only gained popularity in recent years. It’s the best non-dairy alternative in terms of nutrition, offering 6 grams of protein per cup, and has just 3.5 grams of fat and 100 calories per cup.

Like many milk substitutes, almond milk is made by soaking, filtering, and heating a plant-based product — in this case, dry almonds. In 2014, almond milk overtook soy milk as the leading non-dairy option. Nutritionally, however, it only contains 1 gram of protein per cup. Its real strength is calcium, with nearly double the amount found in cow’s milk.

Coconut milk is made by grating the insides of brown coconuts and then adding water, as opposed to coconut water, which is simply water found inside coconuts. Because of the added coconut oil, this non-dairy milk is high in saturated fat. It’s commonly used as a milk substitute, as well as an ingredient in many Asian, Caribbean, and South American dishes.

This gluten-free milk is gaining popularity, threatening to edge out almond milk and soy milk as the most popular milk alternative. It’s made just like soy milk and contains 4 grams of protein per cup. The Swedish company Oatly, which is leading the trend, is available in 2,200 cafes across the country. But, if you’re looking for a cheaper alternative, it’s very easy to make at home. 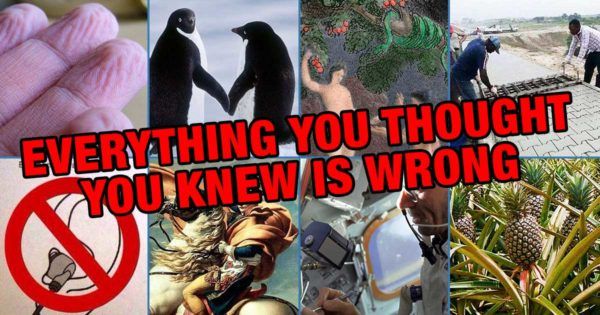 You Probably Thought These Things Were True — They're Not
Hey there, Einstein! You think you know it all, don’t you? You’re a studious one that relishes the opportunity to prove your smarts by dropping tidbits of random knowledge on ...
click here to read more
Advertisement - Continue reading below
Share  On Facebook