BELLEFONTE, Pa. (Reuters) – A lawyer for convicted child molester Jerry Sandusky sought to prove on Monday that prosecutors illegally leaked information to a reporter about the former Penn State football coach and thus tainted the judicial process that resulted in his 2012 conviction.

In the second day of a hearing to consider whether Sandusky’s first trial was fair, his attorney, Alexander Lindsay, called to the stand Michael Gillum, a psychologist who wrote a book with Aaron Fisher, or “Victim No. 1,” one of the young males Sandusky is accused of abusing.

Gillum was asked about a passage in the book “Silent No More” in which Sara Ganim, a reporter who wrote a Pulitizer Prize-winning story about Sandusky, showed up at the home of Fisher’s mother, even though her son’s name was not disclosed at the time.

“I believe it is true that Sara Ganim somehow got information about Aaron Fisher after we and Children and Youth Services went to great lengths to protect his identity,” Gillum said, referring to the state agency.

To win Sandusky a new trial, Lindsay must show that the former coach’s trial attorney, Joseph Amendola, was incompetent. He believes Amendola should have moved to quash the 2011 indictment because of how he believes Ganim got her information.

Lindsay has said in court papers that the Sandusky investigation was failing to find sufficient evidence to prosecute him before Ganim’s story was published in the Harrisburg Patriot-News in late March 2011. The article was pivotal in making the public aware of the allegations against the former Penn State coach, who was indicted that November.

Her use of allegedly leaked grand jury information to write the story tainted the grand jury process, Lindsay told the court in Bellefonte, near the Pennsylvania State University’s main campus, where Sandusky was an assistant to legendary football coach Joe Paterno for 18 years.

Judge John Cleland, who has presided in the Sandusky case from the beginning, has ruled that Lindsay must prove state prosecutors or law enforcement officials actually leaked the information to Ganim, not that it could only have been them.

Ganim, who is now with CNN, told Reuters in a telephone interview on Monday that, on the advice of her attorneys, she could not make any comment about the case.

Lindsay has subpoenaed Ganim to testify but expressed doubt on Monday that she would appear. Under Pennsylvania law, reporters can shield the identity of confidential sources.

Lindsay asked other witnesses, including Corporal Scott Rossman of the Pennsylvania State Police and Anthony Sassano, an agent for the Pennsylvania attorney general’s office, if they knew how Ganim obtained the information. Both denied any knowledge of her source.

Sandusky, who is serving a sentence of 30 to 60 years in prison for his conviction, was present in the courtroom on Monday but did not testify.

The hearing was to continue on Tuesday with testimony from the three Sandusky prosecutors, including Frank Fina.

Fina was at the center of the recent case in which former Pennsylvania Attorney General Kathleen Kane was convicted of leaking information from a grand jury in a separate case. Prosecutors said Kane illegally leaked the information to embarrass Fina, her political rival, and then lied under oath about it. 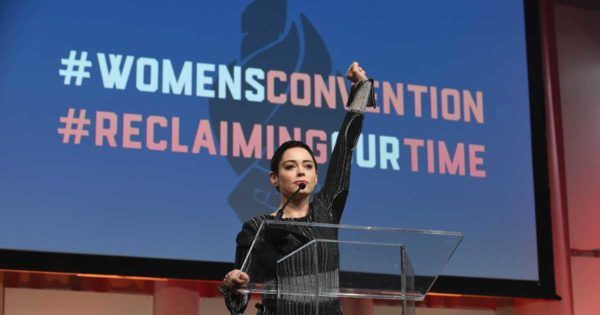 #MeToo: Which Celebrities Are Standing up to Harassment?
The #MeToo movement was started 10 years ago by Tarana Burke, despite many mistakenly crediting actress Alyssa Milano, who brought the campaign to new virality. In October 2017, following Weinstein-Gate, ...
click here to read more
Advertisement - Continue reading below
Share  On Facebook

Sports and Entertainment Stars Converge in Washington D.C. to Rally in Support of Type 1 Diabetes Research