Art is a unique expression of how someone views the world. Others don’t understand the meaning of how an artwork was done and the stories behind it. Expert says that no one can explain the meaning of a certain artwork except its creator.

A thousand words are worth a thousand pictures, and art, like literature, is frequently meant to be read through critical deconstruction. Paintings can be significantly more complex than they look at first glance, and deciphering them can be challenging if the observer does not speak the same language as the artist.

Iconography, or the symbolic language of a work of art, can be complex and nuanced, representing collective consciousness or drawing on the artist’s experience.

These are some of the iconic and well-known paintings in the world and their stories.

Girl with a Pearl Earring

Since its reemergence in the late 19th century, Vermeer’s ‘Girl with a Pearl Earring,” a classic of the Dutch Golden Age, has enthralled visitors with her sad stare. The young woman who modeled for the portrait, on the other hand, is a mystery. It’s been speculated that the girl was Vermeer’s inamorata or daughter. While this may be true, the image was not meant to be constituted as a real person. Further, the person’s turban suggests that the painting was meant to be a “tronie”, an idealized picture dressed in exotic garb.

The gorgeous swirls in this Van Gogh artwork are made up of an amazing color palette. The story behind the artwork, as well as the painting itself, is very compelling.

The picture was inspired by a real-life scene of a material facility where Van Gogh was confined. The scene was a vista from his asylum room’s east-facing window just before the sunrise in Saint-Paul-de-Mausole. He painted this while he was institutionalized during the winter of June 1889.

Venus, the brightest star in the artwork, is claimed to have been seen in Provenceat dawn in the spring of 1889. The waning gibbous moon depicted in the painting was also visible through the iron-barred window. The settlement was only part of the painting that he couldn’t see in his bedroom window. The settlement was supposed to have been inspired by a sketch made on a mountainside above Saint-Remy de-Provence.

The title of this picture is derived from the words Mona and Lisa, which is an Italian form of salutation equivalent to Madam. Lisa Del Giocondo, the wife of a wealthy silk merchant, is thought to be the subject of this iconic picture. She and her husband relocated to a new home, where they have their second baby. The husband, Francesco del Giocondo, commissioned Leonardo to paint a portrait of his wife to commemorate their move to their new home and the birth of their second child. 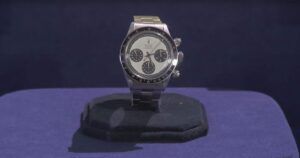 Most Valuable ‘Antiques Roadshow’ Finds
The next time you find something old and dusty in your house, do not throw it away! Sometimes good things happen when you finally decide to clean out your attic, ...
click here to read more
Advertisement - Continue reading below
Share  On Facebook

Sports and Entertainment Stars Converge in Washington D.C. to Rally in Support of Type 1 Diabetes Research

These 10 Places In New York Are Very Dangerous

The Most Iconic Moments From Past Met Galas