March 16, 2017 | By Jason Owen
WASHINGTON, March 16, 2017 /PRNewswire-USNewswire/ — Americans overwhelmingly (95 percent) say health insurance companies should cover emergency medical care, according to a new poll of the public (registered voters) by Morning Consult. These findings are released as President Trump and the GOP-led Congress look to repeal and replace the Patient Protection and Affordable Care Act (ACA).

“Provisions currently in the ACA that directly benefit emergency patients must be protected,” said Rebecca Parker, MD, FACEP. “Patients can’t choose where and when they will need emergency care and they shouldn’t be punished financially for having emergencies.”

When asked if someone visited the emergency department because they believed they were having a heart attack, but were later diagnosed with a panic attack, more than 8 in 10 (83 percent) Americans said that patient’s health insurance should cover that emergency visit. The principle of covering medical care based on symptoms that most people would consider potentially life-threatening, rather than the final diagnosis, is called the “prudent layperson” standard. This was codified into federal law, including the Affordable Care Act, following years of denials of coverage for emergency care by health insurance companies.

Nine in 10 registered voters said that health insurance companies should let patients know how they calculate coverage for emergency care; with a third (36 percent) saying those payments should be determined using a transparent, independent cost database and formula. This comes at a time when insurance companies are increasingly shifting more of the costs of health care onto patients and physicians by expanding high-deductible insurance plans with ever-narrowing networks of providers.

“Emergency physicians are advocating for transparency and use of independent databases, such as Fair Health [www.fairhealth.org],” said Dr. Parker. “The growth of out-of-pocket costs and the reductions of in-network physicians and hospitals are leaving insured people barely covered in an emergency. State and federal policymakers need to ensure that health insurance plans provide adequate rosters of physicians, affordable deductibles and co-pays and fair payment for emergency services. We encourage all patients to investigate what their health insurance policy covers and demand fair and reasonable coverage for emergency care.”

Health insurance companies have a long history of devaluing emergency patients who seek care in emergency departments. For many years, they routinely denied claims based on the patients’ final diagnoses instead of symptoms, leaving patients stuck with bills insurance should have covered. Emergency physicians successfully fought back against those policies, arguing that patients should never self-diagnose their own medical conditions because they feared financial repercussions. A federal law (EMTALA) guarantees that no one will be turned away from an emergency department because of lack of insurance or an inability to pay. Insurance companies have exploited that law to their advantage, ratcheting down payments to emergency physicians knowing they have no choice but to treat the patients who come to them for care. Recently, insurance companies have systematically reduced the number of physicians considered “in-network” while providing inaccurate reports and lists of who exactly is in their network.[i]

“Emergency physicians fought long and hard for the ‘prudent layperson’ standard on behalf of our patients,” said Dr. Parker. “Patients should not be forced to diagnose their own medical conditions. It’s dangerous. Most people lack the training to determine what constitutes a medical emergency — for example, the difference between the pain in the stomach that is life-threatening and the one that isn’t. In fact, physicians can’t tell if it’s an emergency condition until completing a medical screening exam. Patients should not be put in the position of self-diagnosing at home. Their lives depend on it.”

This survey was conducted by Morning Consult with 1,791 registered voters as a national tracking poll on February 9-10, 2017, on behalf of the American College of Emergency Physicians. There is a margin of error of ± 2 percent. For complete poll results, please click here or contact Mike Baldyga at [email protected].

ACEP is the national medical specialty society representing emergency medicine. ACEP is committed to advancing emergency care through continuing education, research and public education. Headquartered in Dallas, Texas, ACEP has 53 chapters representing each state, as well as Puerto Rico and the District of Columbia. A Government Services Chapter represents emergency physicians employed by military branches and other government agencies. 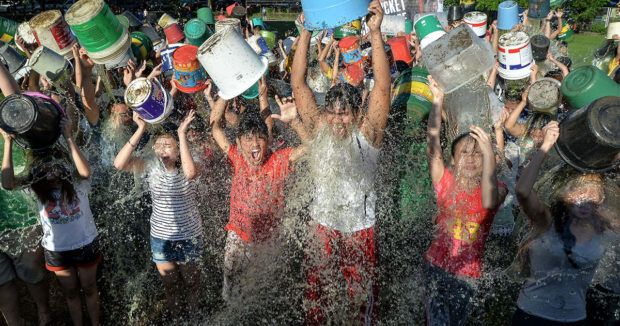 How the Money Raised From the ALS Ice Bucket Challenge Was Used
In 2014, a fundraiser for a disease known as ALS went viral. Celebrities from every corner of the world started to dump ice water on themselves and nominate others to ...
click here to read more
Advertisement - Continue reading below
Share  On Facebook

Waffle House Waitress Didn’t Know She Was Being Recorded

The Most Requested Funeral Songs Of The Last Decade