Newport Tower has remained a mystery for years with some evidence suggesting that the tower features pre-Columbian trans-oceanic contact.

Located in Touro Park in Newport, Rhode Island, British historian Andrew Sinclair believes the tower was built by medieval Scottish Templars who traveled to New England 100 years before Christopher Columbus claimed his discovery of the continent. His theory isn’t popular among all historians, which leaves the tower a mystery for main researchers

Evidence for the building’s origins date all the way back to 1115. That’s when similar medieval buildings began their construction in Scotland.

In 1960, churches were built on the Danish island of Bornholm which bare a very close resemblance to Newport Tower.

For 300 years mills in England featured a similar tower design. The design period ranged from 1200 to 1500.

The towers possible origin also possibly extends outside of Europe. Historian Gavin Menzies believes Chinese sailors build the tower in 1421. He argues that the Chinese built the tower as an observatory or lighthouse. However, other historians have claimed to debunk this theory by pointing to similar structures created by Canadians in the 1600s.

Purchase documents from 1632 suggest that the materials needed to build Newport Tower were acquired. That would place the towers construction more than 500 years after Sinclair’s initial prediction.

Researchers attempted to place a date on the tower’s mortar with the help of a more scientific approach – radiocarbon dating. Researchers pointed to a time period between 1635-1698.

A publication in 1668 refers to George Lawtons Mill, a man who built many mills in Rhode Island.

Here’s the letter referring to George Lawtons Mill’s construction of the Newport Tower:

In contradictory evidence, former Rhode Island Governor Benedict Arnold built a mansion in the area and in letters he made reference to the “stone build Wind Mill” on his estate.

Heading into the mid-1970s documents started referring to the structure as “the old stone mill,” a “powder store” and the “Stone Wind Mill.” The latter was referenced in 1776.

By 1777 the tower was used as a lookout tower by Americans and used to store British munitions.

Fast forward to 1836 and a “Penny Magazine” showcased a 17th century mill that looks much like the Newport Tower.

Some theorists simply suggest that the mill was built in the European style.

In 1837 another theory was offered by Danish archaeologist Carl Christian Rafn. He suggested that the Tower was actually built by Vikings. It is a theory shared by poet Henry Wadsworth Longfellow who wrote about the towers Norse origin in the poem, “The Skeleton in Armor.”

In 1848, Reverend Dr. Jackson conducted a comparative analysis of the Newport Towers mortar with mortar from other structures in town, including the Bull House which was built in 1640. He concluded that the materials were in the tower and various other structures. If correct those materials pre-dated Governor Arnold and George Lawton.

In 1942 archaeologist Philip Ainsworth Means spoke about the towers Norse origin. To confirm or deny this interpretation the Society for American Archaeology allowed a team of researched to dig a wide trench from the exterior to the interior of the structure.

Researchers in 1951 released their findings, claiming that the Newport Tower dated back to the 17th century. They believe Governor Arnold was in fact the structures builder.

The report suggests that the structure wasn’t built as a mill, but rather a “comfortable retreat…for a very rich and very autocratic old man.”

In 1954 English mill expert Rex Wailes added more speculation to the towers mystery, suggesting that it matched the design of tower mills build from the 13th to 15th centuries.

In 1986 researchers discovered documents that appeared to show a purchase of all the materials needed to build the tower in 1642.

During the 1990s astronomer William Penhallow from the University of Rhode Island argued that the structure was built with astronomical alignments in mind.

Still baffled and unable to give direct proof of the tower mills timeline, researchers in 1992 conducted new radiocarbon dating of the tower’s mortar. They found the building to be constructed sometime between 1635 to 1698.

From 2006 to 2007 the Chronognostic Research Foundation conducted an archaeological investigation and they also placed the tower’s build date sometime in the 17th century. Interestingly enough they also found that the Newport Tower was built along astronomical alignments.

While much of the evidence for Newport Tower’s construction does indeed seem to point towards the 17th century, it’s still a bit of the mystery. Did the Knights Templar build the tower? Perhaps the Chinese or the Norse created this mysterious structure. Or maybe it was the Brits. And why was it built? As a windmill, an observatory or maybe even a temple? 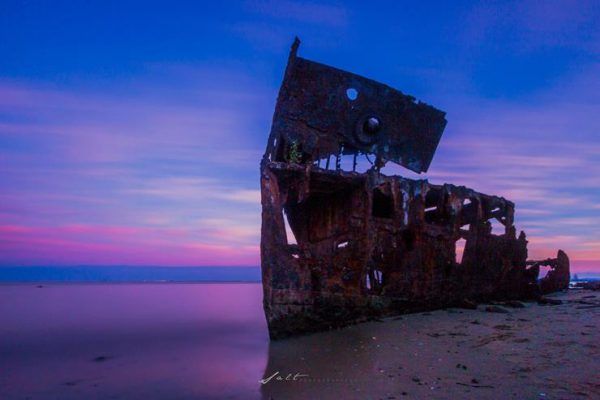 Mysterious Shipwrecks That Could Be Haunted!
According to studies conducted by the United Nations, there are nearly 3 million shipwrecks across the ocean floor — but some wrecks are above the surface. There is something about these shipwrecks that incite an ...
click here to read more
Advertisement - Continue reading below
Advertisement - Continue reading below
Share  On Facebook

Best Tech Gifts: The Greatest Gadgets to Give and Receive

The Most Hated Players in the NFL