LOS ANGELES, May 8, 2017 /PRNewswire/ — Young banker Emmanuel Macron has been elected president of France. Macron is the youngest president that has ever governed the European Union member-state, and is taking office at a time in the nation’s history which is rampant with terror attacks, market instability, and racial tensions. Macron has never held political office, and his contentious race against right-wing candidate Marine Le Pen was a hotly contested tipping point for the markets.

With Macron’s win, the Eurozone can rest assured that France is not going to join their British neighbors in withdrawing from the European Union.

However, in the next few weeks, the global landscape will see a number of additional changes. In late May, another election is taking place in Iran, as well as the 43rd G7 Summit taking place in Italy. In early June, a snap election has been called for in England, and a summit will take place in China concerning Asian infrastructure plans.

The central banks, including the European Central Bank, have been raising red flags in response to all of this mounting uncertainty. The central banks have not bought gold at such a rapid, long-winded pace like the one we’re seeing today since 1950, when the markets were recovering from World War 2. Over just a four year span, from 2010 to 2014, the central banks’ demand for gold increased by 12 percemt, and the demand shows no signs of slowing.

The activities of these banks are significant because their responsibility is managing their country’s money supply and keeping their nation financially secure. These banks buy gold when they need to manage risk and promote stability, especially when their currency is sagging.

Gold is taking a dip this week in response to Macron’s presidency win, but has still made impressive gains since the start of the year. Over the first quarter of 2017, precious metals were the strongest performing commodities sector of all, with gold gaining 11 percent, and the industrial metals trailing closely behind. The Trump administration’s infrastructure policies promise to benefit the precious metals market, and investors are awaiting the remainder of the spring election results to see how the markets will react from there.

“The jury is still out on the uncertainty with what will happen to the European Union,” said Jonathan Rose, CEO of Capital Gold Group. “All eyes will be on the central banks and how the markets will react to this political shakeup. One thing is for certain though, volatility will be the mainstream focus, which has a lot of gold bulls watching closely.” 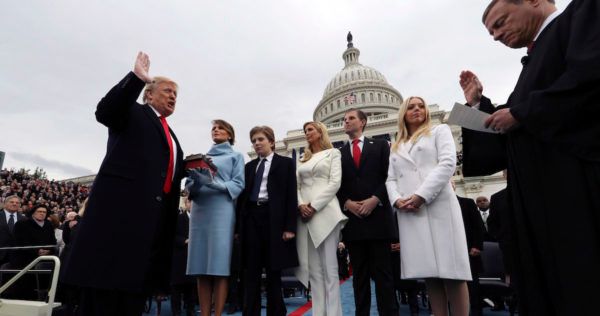 These Government Photos Were Top Secret – Until Recently